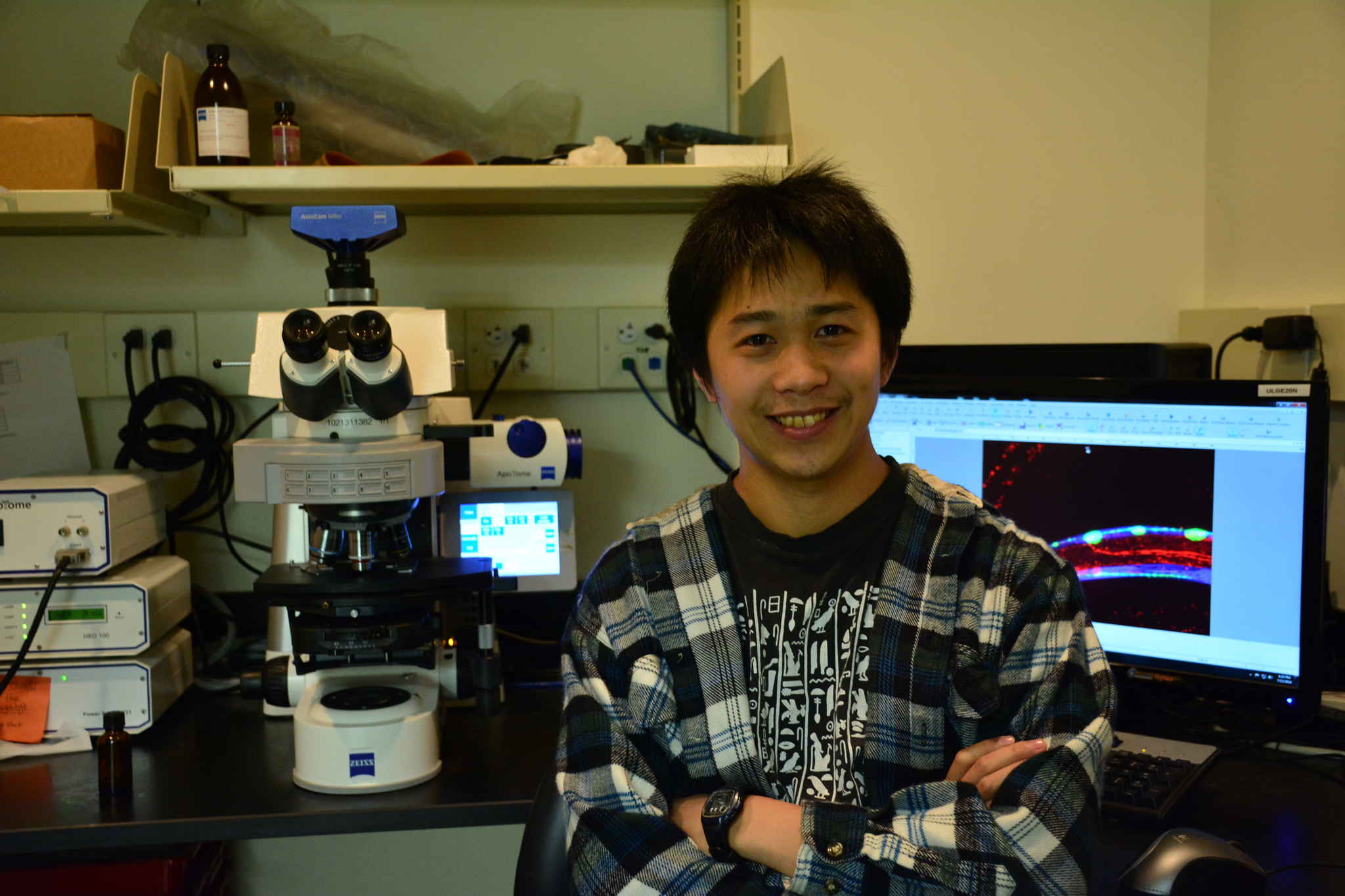 Dr Tang's research experience began in 2009 May,  under the supervision of Prof. Au Wing-Ngor Shannon in the department of Biochemistry, CUHK. His research focused on SUMOylation, a post-translational modification where a small protein affects the function of other proteins through covalent attachment onto the affected protein’s lysine residues. The project aimed to identify potential SUMOylation targets using in vitro SUMOylation assays. By the end of the project, he was able to identify GAPDH, an essential protein in glycolysis, and PRDX1, an antioxidant enzyme, as potential targets.  He also applied for the Dedicated Research and Exchange Mentorship (DREAM) program in summer 2009 uring his undergraduate studies, and was placed in the lab of Prof. Michael K Chan in Ohio State University, USA. His group is the first to report the 22nd encoded amino acid, Pyrrolysine, and is a pioneer in applying this discovery as a versatile biochemical tool.  He worked on creating an enzyme-free reaction for producing SUMOylated protein, using Pyrrolysin analogue substitution labeling, intein technology and Native Chemical Ligation. He was invited to work in Michael Chan’s lab again and looked into the use of Pyrrolysine analogue substitution in peptide enrichment for MALDI-TOF. This approach utilises Pyrrolysine analogue substitution in conjunction with Cu(I)-catalysed click chemistry to enable covalent isolation of specific peptide after trypsin digestion.

While he started research from a biochemical perspective, he was interested in cell biology of neurons to understand the underlying mechanism of the brain. Therefore, he joined Prof. Jeremy M Henley’s lab in University of Bristol, UK in 2011 October as a PhD student. Prof. Henley’s group to investigate the effect of SUMOylation in neuronal function, combining his subject of interest. His PhD studies focused on the effect of SUMOylation on Synapsin Ia, a presynaptic protein crucial in regulating the availability of neurotransmitter release.  It was verified that Synapsin Ia is a bona fide substrate for SUMOylation, and SUMOylation increases Synapsin Ia’s affinity towards Synaptic Vesicles, thereby regulating neurotransmitter availability. He further discovered that a point mutation in Synapsin Ia associated with Autism Spectrum Disorder decreased Synapsin SUMOylation, suggesting a link between SUMOylation and Autism pathogenesis.

During his PhD he started to become interested in research in neuronal development, one of the most intriguing and complicated field in cell biology. He also learned how C. elegans are being employed in this field with numerous successes. Therefore, in Oct 2015 he joined Prof. Hannes E Buelow’s lab, where mechanisms of neuronal development in C. elegans were investigated.

In order to form the proper connection for communication, neuron develops thin protrusion that can send and receive electrical signals at a distance. These protrusion (axons and dendrites) often have a multitude of branches and forms a tree-like structure. It is clear that formation of these structure are tightly regulated by signals from the neurons and its surrounding extracellular environment. However the identity and function of possible molecular players involved are yet to characterised. Therefore, his current work focus on dissecting the molecular interplay involved in dendrite morphogenesis using C. elegans neuron PVD as model. PVD are pairs of neuron that form highly elaborate and ordered dendritic trees, and therefore mutation in genes involved in dendrite morphology can be easily identify as disruption in its structure can be easily visualized. Multitude of factors have been identified that is necessary for correct PVD morphogenesis. He is especially interested in kpc-1/Furin, a proprotein convertase that activate other protein. The main goal of my project is to identify its downstream target(s) and characterize its role in the context of known pathway involved in PVD dendrite morphogenesis. The results could provide insight into conserved general mechanism of regulation in dendrite development.

He is also interested in the regulation in the formation and maintenance of specific synapses. Synapses are communication relays between neurons and therefore the specificity of synaptic connection is fundamental to a functioning neuronal circuit. Crucially, the formation or pruning of specific synapses may contribute to learning and memory. He is currently employing a novel method of visualizing synapses between two specific neurons. This method, termed iBLINC (in vivo Biotin Labelling of INtercellular Contacts), involves the expression of pre- and post- synaptic cell adhesion molecule pair NRX-1 and NLG-1 fused with Biotin ligase and accepter respectively. Therefore NLG-1 will be labeled with biotin, and can be visualized with secreted streptevadin fused with a fluorophore. By choosing single-neuron specific promoters, only synapses between two specific neurons will be labeled. This allows the interrogation of the number, strength and dynamics of this specific connection under different condition. He is interested in exploring these aspects in left-right asymmetry, sexual dimorphism, and habituation. Investigating the molecular mechanism of how these synapses are specified, pruned or maintained in C. elegans may reveal conserved pathway in synaptic regulations, providing much needed understanding in the biochemistry of neural network formation, maintenance and plasticity